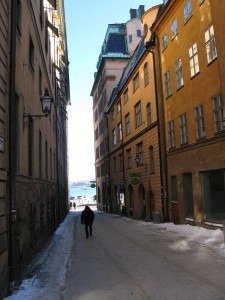 Yesterday was yesterday. Isabella felt that it had been a great day, but some of the coaching had not been so easy. She still had Camilla vividly appearing as soon as she closed her eyes for a moment. Amazing how easy it was to arrive the wrong conclusion. Better to let the client tell you more before starting to put things together. But Isabella loved putting things together! She had a flair for making sense of only fragments, a feeling for connecting them into something bigger. Her family had laid puzzles every Christmas when she was young and she had always tried to figure out “who did it” in the numerous detective stories she had read. If she had not become a journalist and now also a coach she might have wanted to become a detective or a policewoman. But both journalism and coaching was about finding out too. She had therefore chosen to have a “one-liner” in relation to her company and her e-message signature. “Detect Yourself!” And today she would have the pleasure of meeting her first cop! During her coach training there was a discussion on if you had to have field knowledge in order to coach someone and the class had been divided into two groups. One group believing that the process knowledge you had as a coach was quite enough, and the other maintaining that field knowledge was an asset and even crucial if you should coach a person higher or deeper into a special field. Isabella was inclined to agree that on one hand you could find more relevant filed questions if you knew stuff but on the other hand there was also a risk of the coach steering or colouring the conversation leading it to unwanted places. And now she was waiting for Harry the cop. She had no prior experience from police work other than her interest for detective stories. She hoped that he was nothing like “Dirty Harry” from the Clint Eastwood films. And nothing like Inspector Clouseau either. Isabella had been very lucky a few weeks ago and had by chance landed a deal with the Stockholm Police force. They had created a Personal Development Program for their leaders and one part of it was cash that the individual leader could spend freely. Three of the policemen had chosen coaching by ISIS. One of them was Harry Andersson.
She had already received information on the three cops that she had been “given”. On Harry she read: “Inspector, The Criminal Investigation Unit, social security number 660526-1715, married, 2 children, Stockholm”.  Isabella deducted that Harry was born not so far from where she was born. “I wonder where.”

You Only Live Twice